help families and small businesses facing challenges because of the pandemic

Ensure every student gets a great education

Strengthened Investments Are the Key to Great Schools

Great public schools are part of the foundation of a thriving community. They reflect our understanding that every child has something to contribute and embody our commitment to providing the support children need to learn and thrive. Strong schools build the groundwork for our future prosperity by creating tomorrow’s skilled workforce and making Maryland an attractive place for families and businesses. While our state’s best schools demonstrate what is possible when we invest in learning, Maryland’s current education system does not grant all children the same opportunities.

A Story of Progress and Retreat 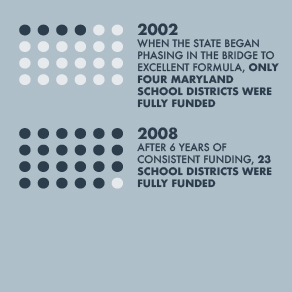 Following passage of the Bridge to Excellence in Public Schools Act of 2002, the state ramped up education funding based on an analysis of the resources school districts needed to satisfy the state’s academic standards. During this ramp-up, the number of school districts at or close to this standard increased from four in 2002 to 23 in 2008—all but one of Maryland’s 24 county-based school districts. 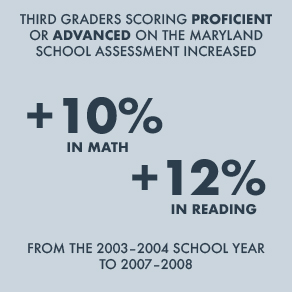 For example, the share of third graders scoring proficient or advanced on the Maryland School Assessment increased by 10 percentage points in math and 12 percentage points in reading from the 2003–2004 school year to 2007–2008. The gains were even larger in school districts where large numbers of students face barriers to learning because of low family income or the legacy of racial segregation.

As the Great Recession dragged house prices down and unemployment up, state and local revenues declined.

Policymakers responded by suspending scheduled inflation adjustments in our school funding formula from 2009 to 2012 and capping the adjustments through 2015. During these years, improvements in student achievement stalled. For example, the share of third graders scoring proficient or advanced on the Maryland School Assessment in math increased by only 5 percentage points from 2007–2008 to 2011–2012, while the proficient and advanced share in reading increased by only 2 percentage points. 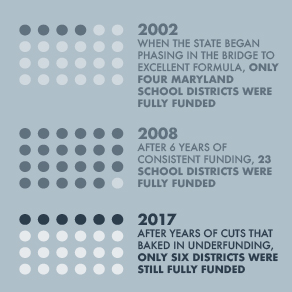 Althought the state has since resumed making annual inflation adjustments, the cuts made between 2009 and 2015 continue to harm students.

Because prices throughout the economy continued to rise during these years, it would have required an extra-large catch-up adjustment to make up the lost ground. The state instead simply returned to making routine annual adjustments, as if the earlier cuts had never happened. This decision made the cuts effectively permanent. Underfunding is now baked into our school funding formula, even in years when there are no additional cuts.  By 2015, the number of fully funded school districts had fallen to six, nearly back to the number in 2002. 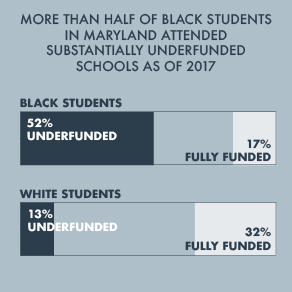 Because Maryland schools are among the most racially segregated in the nation, these cuts hit students of color hardest. 2002

More than half of all Black students in Maryland attended a school district that was underfunded by 15 percent or more as of 2015. Eroding school funding also made a tangible impact in the classroom. Maryland public schools served 29,000 more students in the 2014–2015 school year than in 2007–2008, but they did so with fewer teachers to help these children learn. 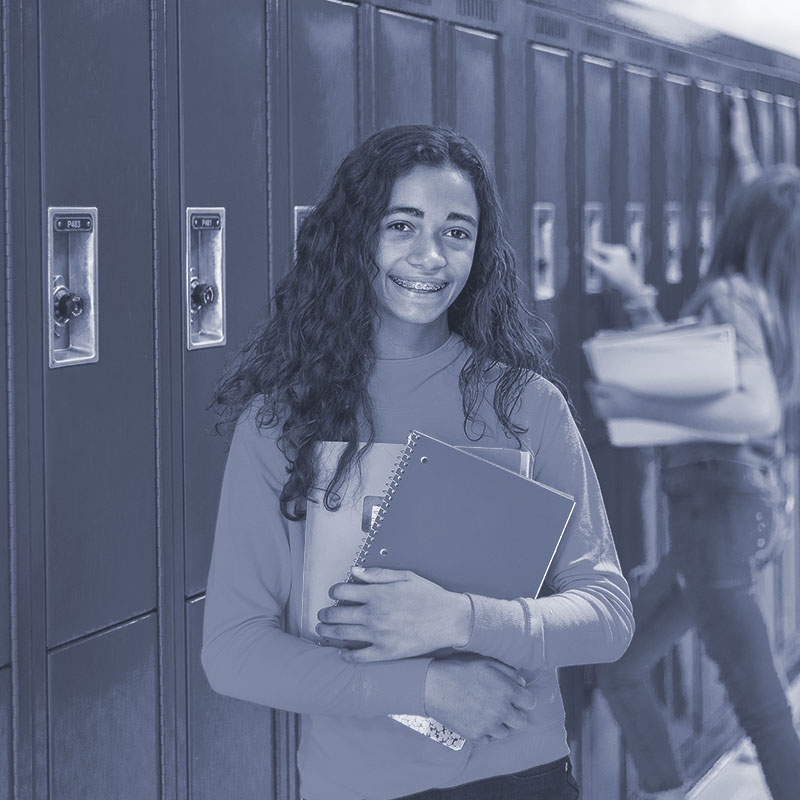 We can do it again!

As Maryland’s history of school funding shows, we have not invested enough in education in recent years to set our children up for success—but that hasn’t always been the case. We committed to providing all children a great education in the early years of this century, and for a few years we made that vision a reality.